Printable Resources, Activities, and Goodies for St. Patrick's Day! There are coloring pages, candy wrappers, limerick starters, a variety of word puzzles, picture prompts for writing, and yep, even more. Enjoy the free printable activities and Have a Blessed St. Patrick's Day! 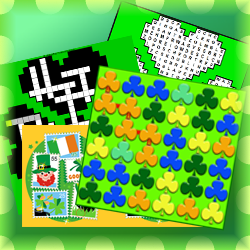 St. Patrick's Day is not an official U.S. holiday, although it is celebrated with parades and parties throughout some of the major cities. It is, however, a public holiday in Ireland, honoring this missionary who brought the gospel of Christ to their Emerald Isle. St. Patrick was not originally from Ireland, but was born in Britain in the late 4th century AD. Britain was under the Roman rule at that time and most of the residents practiced the Catholic religion. Ireland was not under the Roman rule, and the Celts who lived there practiced a religion called Druidism, which focused on a "spiritual" relationship with nature. Ireland was separated into tribes or clans, and each tribe was ruled by a chieftain. At the side of each chieftain was a Druid minister.

At this time, the Roman soldiers began to leave Britain. This made the country vulnerable to the pirates and marauders from the countries around it. When Patrick was 16 years old, he was kidnapped by pirates and sold into slavery in Ireland. It was during this time that Patrick developed a deeper relationship with God. He often had dreams and visions. After being a slave for six years, Patrick was led to escape his captors, and he returned to Britain. He studied a while in France as he continued his relationship with God. He continued to have dreams and visions about Ireland, and he was certain that God was leading him back to Ireland and his former slave owners to preach the gospel to them, to the Irish people, and the slaves still there. He petitioned the church to let him return, and with little support, he went back to Ireland where he preached the gospel. He used the knowledge that he had gained as a slave to discuss the good news with the chieftains, the Druid "spiritualists," and the everyday people. St. Patrick is known for converting much of Ireland to Christianity. The Book of Acts was, and is still, being continued throughout history.

Most of what is known about St. Patrick is found in his own writings, The Confessio and his letter to the soldiers of Coroticus. However, there are many legends and tales about the man and how he ministered to the Irish people. So to celebrate this holiday, not forgetting the great impact he had on the spread of the gospel, I've put together some resources to print and some fun little games to play. Please have fun and Erin go Bragh (Ireland forever)!